How secure is Windows RDP?

By default, a Remote Desktop session is operated via an encrypted channel which prevents anyone to view your session by network listening methods. Although this is a secure method, it is still susceptible to “man-in-the-middle-attack” to a certain degree as well as a form of brute-force attacks or simple guesses if the attacker has any info on your general likes, preferences and habits (Social media is fun indeed).

Remember those annoying updates notifications ? They do come in very useful to ensure the security and stability of your operation system (among other things). The software used for RDP benefits from security updates from the developers on a constant basis, due to its crucial importance. If you’re using older Windows variants, consider switching to a newer one and that the update system is up an running.

This is a general tip as using plain words are much easier to crack or guess. The best option here would be using a password of minimum 10 characters, lowercase and uppercase, a symbol and a number. Something like “Th1s1sMyP@$$WorD” is fairly complex and rather secure as long as you do not store it in plain text or write it down somewhere in an unsafe place. Consider using Keepass , it’s a very useful tool with both linux, windows and android/iOS clients.

By default, Windows has a fairly reliable firewall and easily configurable but some features are not required for workstation use such as file sharing rules , printer sharing or other non-used network features. It very much depends on what you are using it for.

An extra layer of security would be adding an IP range lock. Basically , this locks the RDP server to listen only to IPs specified in the desired IP range. This is a double-sided sword and use only if you are certain your IP address is fixed and does not change randomly like a dynamic one OR you have a VPS set as a connection gateway or vpn used solely to connect to your RDP. A bit overkill but there are even more intricate ways than this. The IP lock can be added at Windows Firewall > New Rule > Scope feature where the IP range can be defined.

It is commonly known that Windows Remote Desktop port is 3389 and thus attacks are generally targeted at this port. A common practice would be to change it to a random free port and add the change to the firewall. Make sure you don’t get locked out during the process.

Further improving RDP security, Windows does offer the option to lockout RDP login for a certain period of time, after a certain number of incorrect guesses. This option is turned on by default but can be easily enabled.

Enhance the encryption level with TLS 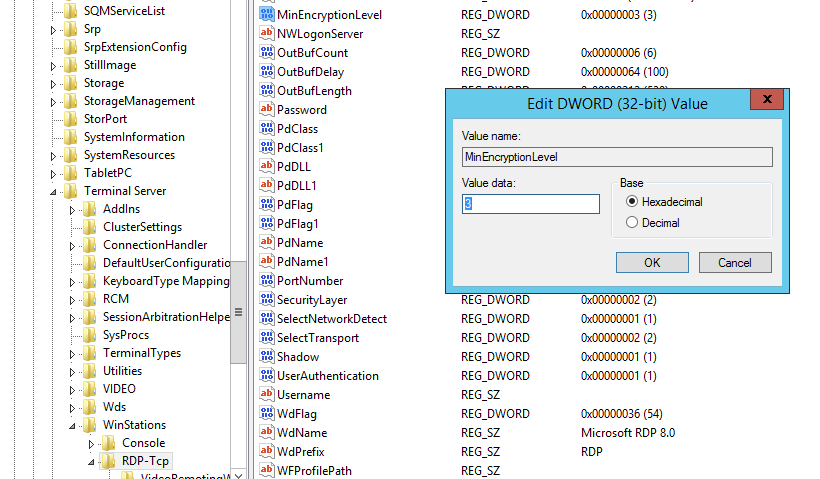 On a final note

There are other more complex methods as well but for the average user , these should be more than enough. How far you want to go , is up to you.